American Atlases: These atlases cover the history of the United States and Canada.

Atlas of Early American History: The Revolutionary Era 1760-90: This Atlas has a wealth of information on the early history of the United States. Included are visual representations of the largest cities in the American Colonies, the boundaries between the states, the Spanish borderlands, Indian settlements, population maps showing the distribution of urban and rural population, the non-English population, African American population, as well as the economic, cultural and political activities of the colonies. If you need any information on America at the time prior to and during the American Revolution, look here as there are few aspects of life that are not covered. Text. Color.

Atlas of the International Boundary between the United States and Canada along the 141st Meridian. A historical curiosity, this atlas was published by the U.S. government in 1918 as a result of a survey conducted by geographers from the U.S. and Great Britain from 1907-13 to determine the boundary between what is now the panhandle of the state of Alaska and Canada. The boundaries of the area were disputed until 1903 when the Alaskan boundary commission determined where the line was to be. The area was subsequently surveyed and the results published officially by the U.S. government in this book. Color.

Illustrated Historical Atlas of the State of Indiana: A reprint of an 1876 atlas which shows the cities, towns, settlements, railroads and geographic features of Indiana. B&W.

National Atlas of the United States of America: Visual representation of America’s physical geography, history, economy, administrative details (time zones, voting districts, federal courts), and socio-cultural information. Published in 1970, it has a maps and charts illustrating such diverse topics as navigation, air pollution and geographic expeditions to the Arctic and Antarctica. Text, color.

West Point Atlas of American Wars: This is the premier set of Atlases describing the various conflicts America has been engaged in beginning in 1689 until 1953. It was originally prepared for the use of cadets at the United States Military Academy at West Point. In addition to detailed maps and descriptions of the Revolution, Civil and World Wars, it also covers Colonial Wars, the War of 1812, and the Mexican, Spanish-American and Korean War. If you are looking for information and detailed battle charts for any major American conflict, this is the book. Text, B&W maps, color battle lines and movements.
Posted by Hewes Library at 11:07 AM No comments:
Email ThisBlogThis!Share to TwitterShare to FacebookShare to Pinterest
Labels: atlases, reference, research_tip

Hewes Library will extended its hours into the weekend before finals to allow students more time in the building to finish papers and meet with groups over end of the semester projects. The library's hours are listed below and are also available on the library's website under the Hours Section.

Posted by Hewes Library at 11:09 AM No comments:
Email ThisBlogThis!Share to TwitterShare to FacebookShare to Pinterest
Labels: about_the_library, hours

Hewes Library has a number of interesting historical atlases that give graphic views of the countries and events of the past. Unlike the atlases in the other entries, not all of these atlases have color illustrations. The presence or absence of color illustrations is indicated after the entry. The use of the word “text” after an entry indicates that there is a lot of explanatory material accompanying the charts and maps. Not included in these historical atlases are those referring to the United States or those that deal with the world’s religions. These will be covered in future entries.

Atlas of Ancient History: Primarily a history of Greece and Rome in maps, although other areas that affected the development of the Classical World (such the Persian and Carthaginian empires) are included. The period from 1700 B.C. to the early years of the Byzantine Empire under Justinian I is illustrated. B&W

Atlas of British History: The maps display the history of Great Britain from 50 B.C. until 1967. In addition to maps showing the early history of the country including the Norse and Danish invasions, there are maps showing where events significant to Britain or its Empire occurred, such at Waterloo and the World Wars. British colonial ventures in the New World are also depicted. Given the far-flung nature of British political and economic concerns, much of the history of the world is depicted in these charts. Color. Text.

Barrington Atlas of the Greek and Roman World. This very large atlas illustrates a wider range of geographic areas that comprised and influenced the Greek and Roman world than either the Atlas of Ancient History or the Atlas of Classical History. These two atlases concentrate on illustrating historical events. The idea behind the Barrington atlas was to make clear to students and scholars the relationship between the land and historic events. The maps display the topography of areas, with ancient cities, roads and geographical features clearly displayed. The maps are not organized by the current names of places, but by their ancient names, with a large map at the front showing which portion of the world it illustrates. There is a good index at the back useful in locating where an ancient location is displayed. Color.

Atlas of Classical History: Unlike the Atlas of Ancient History, which contains almost no text, this Atlas is a combination of text and illustration showing the development of ancient Greece and Rome from 6500 B.C to 314 AD. B&W

Atlas of Russian and East European History: Shows in graphic form the many changes endured by the lands of Eastern Europe and Russia during their history. This region of the world changed hands more times than be counted and each invasion, uprising, and establishment of a kingdom/empire is illustrated. The maps cover the period dating from the Barbarian invasions of the 4th century to the establishment of the Eastern block of nations under the control of the Soviet Union after World War II. Each section of maps is prefaced by a short introduction. B&W

Atlas of War & Peace: Bosnia Herzegovina: A brief introduction to the many forces that resulted in the war leading to the separation of Bosnia and Herzegovina from the former Yugoslavia in 1996. This small Atlas gives a short explanation of the “Who-What-Where-When-Why-How” of the conflict, along with many maps illustrating the region. Text. Color.

Atlas of World History: A large book showing the history of the world in a combination of text, charts and maps. It covers the period 9000 B.C. until the early 1990s. A useful feature is a timeline found at the front of the book that gives a side by side comparison of what was happening where and when, along with cultural milestones. For instance, in the mid-16th century while the English were defeating the Spanish Armada, the independent kingdom of Siam (Thailand) was founded, the Moroccans destroyed the Donghay kingdom in Africa and tobacco was introduced into Europe. This is a good place to find charts and maps of many historic events. (Text, color)

Forma Urbis Romae: This is a reprint of the famous work of the Italian archaeologist Rodolfo Lanciani who published a 1:1000 scale map of the ancient, medieval and modern city of Rome between 1893 and 1901. Each chart describes an individual section of the city. Unfortunately, the text of the pamphlet included with the maps is in Italian. B&W

Historical Atlas of South Asia: Although this atlas says “South Asia” it is actually a detailed historical atlas of the region surrounding India, including Pakistan, Nepal, and Sri Lanka (formerly called Ceylon) If you need any information on this region’s history, geography and development you will find it in this atlas with its combination of text, maps and charts. (Color)

Historical Atlas of South-East Asia: Many maps and text that graphically illustrate the many changes and influences experienced by this region throughout its history. The colorful charts show things like: the prehistoric migrations of people, the development of various Kingdoms such as the Hindu, Khmer and Mongol, trade routes, regional archaeological sites and the locations of twentieth century conflicts. Color.

Poland: A Historical Atlas: Illustrates the history of Poland. From its beginnings in 600, the Polish people have passed through many statuses from independent kingdoms and republics to a total loss of independence during times of invasion and partition, until becoming a part of the Soviet bloc after World War II. The recent establishment of an independent Poland is not covered by this atlas, which was published in 1985, before the collapse of the Soviet Union. B&W
Posted by Hewes Library at 3:37 PM No comments:
Email ThisBlogThis!Share to TwitterShare to FacebookShare to Pinterest
Labels: atlases, reference, research_tip

This year marks the 500th Anniversary of King Henry VIII's accession to the British throne. Currently on display is a collection of library materials relating to the monarch's reign and his family. Materials on display are available for checkout. Please see a staff member at the library's circulation desk. 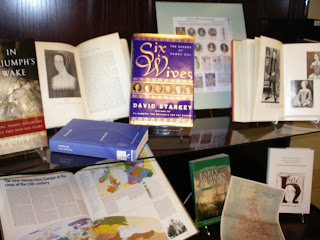 The Royal Household held a 500th Anniversary Exhibition at Windor Castle to mark the occassion and created an online exhibition on Henry VIII's life and regin for those who were not able to attend in person. The British National Archives also created an online exhibition featuring a variety of documents from Henry's regin, including marriage records, Anne Boleyn's treason papers, and his religious tracts. 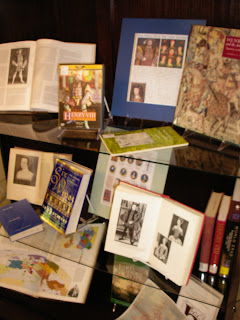 Posted by Hewes Library at 10:10 AM No comments:
Email ThisBlogThis!Share to TwitterShare to FacebookShare to Pinterest
Labels: on_display 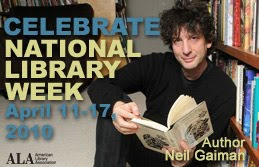 With the advent of televisions in the mid-1950s, research showed that Americans were spending less money and time on books and reading. ALA helped form the National Book Committee in 1954 and three years later, the committee developed the plan for National Library Week. The first National Library Week was celebrated in 1958 with the theme “Wake Up and Read!” as assembled by ALA and the Advertising Council.
Posted by Hewes Library at 2:07 PM No comments:
Email ThisBlogThis!Share to TwitterShare to FacebookShare to Pinterest
Labels: on_display, what_are_you_reading?

The Big Read 2010: My Ántonia by Willa Cather

This spring Hewes Library will join The Galesburg Public Library and the surronding community in The Big Read. The Big Read is a program sponsored by the National Endowment for the Humanities, in partnership with the Institute of Museum and Library Services and Arts Midwest.

Each year, communities apply for grant funding to select a book and read the book as a community, looking at the piece's themes and encouraging events to coincide with reading the text. This year, My Ántonia by Willa Cather was selected as the book for Western Illinois Reads - organized by the Galesburg Public Library. The Big Read has a reader's guide set up to provide context for the book and additional resources available.

There are several events planned - in addition to discussions of the book. More information can be found on the Galesburg Public Library's Big Read webpage.
Posted by Hewes Library at 10:13 AM 1 comment:
Email ThisBlogThis!Share to TwitterShare to FacebookShare to Pinterest
Labels: what_are_you_reading?
Newer Posts Older Posts Home
Subscribe to: Posts (Atom)