In addition to the World Atlases, Hewes library has some more detailed regional/country atlases that give more information on an area than what is found in the traditional Atlas.

Atlas de Espana: A two volume atlas of Spain published in Spanish by El Pais, a Spanish news service. The first volume has detailed maps of mainland Spain and its islands (the Azores, Balerics, Canaries and Maderia). The second volume has charts, text and photographs detailing Spain’s commerce, culture, geography and geology. (in Spanish)

Atlas of Japan: An older Atlas with detailed information on the physical, economic and social aspects of Japan in the 1970s. The climate and ocean current information is still useful.

Atlas of Israel: A very large Atlas containing a huge amount of information on a very small, but very significant country. In addition to the usual things found in a regional Atlas, it also contains historical maps of the area showing significant archeological sites and the history of the region from prehistoric times through the biblical kingdom of Israel, through Arab and Ottoman rule to the modern state of Israel.

Atlas of Modern Israel: This older atlas contains useful basic information on the geography, climate, geology and flora and fauna found in the region. The most interesting parts of the Atlas relate to the history and origins of the state of Israel and it also has an interesting entry on places on the country that are holy to various faith groups including Jews, Christians, Muslims, Druze and Bahais.

Atlas of the South Pacific: Very detailed maps, with short entries on the people, industries and geography of a little known region of the world.

Landscape atlas of the USSR: An old Atlas published by the United States Military Academy at West Point that contains detailed geological and geographic information on the country that was the Soviet Union. This atlas clearly demonstrates how geology and landscape influence settlement, industry and agriculture in the region.

New Zealand Atlas: Contains information on the geological formation of the islands and how that has influenced settlement and development of the one of the world’s most remote countries. It also has the most detailed maps of New Zealand.

State of China Atlas: Contains many colored maps containing information on the people, culture, economy and political system of China.

The U.S.S. R. and Eastern Europe is an Oxford University Press publication from the 1950s. This atlas is interesting in that Russia and Eastern Europe were closed societies at that time, and this atlas represents a “best guess” as to economic and industrial conditions found in these countries.
Posted by Hewes Library at 12:16 PM No comments:
Email ThisBlogThis!Share to TwitterShare to FacebookShare to Pinterest
Labels: atlases, reference, research_tip

Hewes library has many “traditional” Atlases in its collection. These all show a range of information on the many countries and regions of the world ranging from detailed road and topographic maps of the earth to charts explaining the geographic and geologic features of the planet to historical maps illustrating the location of various empires over time.

All of the Atlases detailed in this section have roads and topographic features displayed, but the unusual features of each are described below.

Britannica Atlas has a small section of historical maps, information on major industries, claims made by various countries of navigable waters, and English, German, French, Spanish and Portuguese indexes of any given location. It also has regional and detailed national information of some areas. The maps vary in scale of the maps, some very detailed, some not so detailed.

Collegiate Atlas of the World is published by National Geographic, so it has very good illustrations and maps. The Atlas incorporates satellite images into the different topics covered and uses information from global and national sources such as World Health Organization, U.S. Government and the World Wildlife Fund. In addition to the charts, maps, images, there are nuggets of trivia found in each section.

Hammond 5th Edition World Atlas: It has a good Table of Contents that shows where to find locations. It contains very current data (up to 2008) and has information and statistics on a wide variety of topics. Has a section of satellite images of cities, mountains and coastlines.

Macmillan Centennial Atlas of the World and Planet Earth: Uses satellite images, all maps to the same scale, all major roads shown. These are geographic atlases containing maps and none of the extraneous information. The Centennial Atlas has detailed maps of major cities from Amsterdam to Wash D.C. and the major city maps use the local language to describe features, including Arabic, Chinese and Japanese scripts/characters along with the Western script.

New Century World Atlas: Contains a world flags section in the front and has a good index. This atlas has information on a wide variety of topics including: global relationships of different environments, population, religion, standards of living, literacy, manufacturing and industry, land use and regional mineral resources. It ends with a collection of world statistics.

Oxford Atlas of the World 2005: An atlas that contains information on many different topics including: conflict, energy, travel and tourism, global warming, the stars, planets, world cities, regions and oceans. The text incorporates maps, charts and photos to illustrate the different topics.

Peters Atlas ‘philosophy is that all countries should be displayed as equally important, so the same map scale was used for each. The map section is the first half of the book, each map being 1/60 of the world’s surface. The second half displays charts and maps on different themes primarily geographic features, but also contains other information like climates, volcanoes, hurricane/typhoon prone regions, languages, education, etc. It also has charts of intangibles like “inequality”, “social order” and the “status of women” (mostly derived from United Nations Data, but in some cases they made their own estimates of information)

Times Atlas of the World: This old 1959 atlas is before the disintegration of the U.S.S.R. into Russia and other states and the establishment of many of the current African States, so is a good reference to use if you are looking to see what places were named and what they looked like 50 years ago. It contains other interesting information such as the world’s surface routes (roads, railways) and major air routes of the time.

A curiosity in this collection is an Italian automobile club atlas of the world from the 1950s.
Posted by Hewes Library at 10:48 AM No comments:
Email ThisBlogThis!Share to TwitterShare to FacebookShare to Pinterest
Labels: atlases, reference, research_tip

Hewes Library announced the implementation of ILLiad—a new interlibrary loan service to the Monmouth College campus last week. You can now request, and in most cases receive, articles electronically.

There are still a few opportunities to learn more about ILLiad by attending one of the sessions listed below in the the Hewes Instructional Area (HL124) - located on the library's Main Level. Stop by to learn more at the following times:

Posted by Hewes Library at 11:52 AM No comments:
Email ThisBlogThis!Share to TwitterShare to FacebookShare to Pinterest
Labels: articles, interlibrary_loans, journals, magazines, research_tip 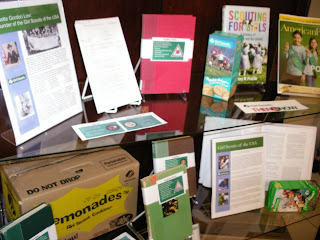 Today there are almost 3.5 million members within the US and the Girl Scouts organization is active in 90 countries overseas. A collection of books, uniforms, trivia, and more is currently on display. Books are available for checkout; please see a member of the Hewes Library staff at the Circulation Desk to check out an item. 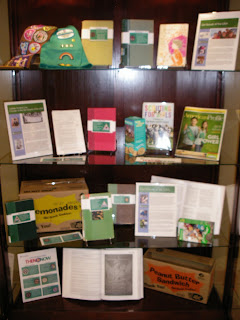 Posted by Hewes Library at 9:31 AM No comments:
Email ThisBlogThis!Share to TwitterShare to FacebookShare to Pinterest
Labels: on_display 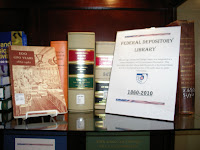 2010 brings the 150th Anniversary of the Federal Depository Collection of Government Documents at Hewes Library and Monmouth College. Throughout 2010, portions of the Government Documents Collection will be featured.
In 1860, Congress authorized the Federal Depository Library Program which ensured that citizens had access to all information that was being produced by the government. Today, there are over 1,250 depository libraries throughout the country and they provide access to a wide variety of information. Citizens can go to any depository library to access information from the Census, any executive department, or get help looking for electronic goverment documents. 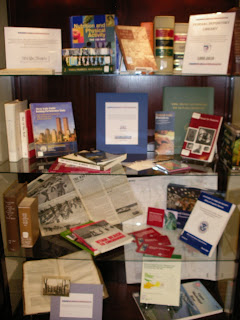 Posted by Hewes Library at 10:59 AM No comments:
Email ThisBlogThis!Share to TwitterShare to FacebookShare to Pinterest
Labels: about_the_library, gov_doc_anniversary2010, gov_docs, on_display

Atlases: Part 1, What is an Atlas and why should I use one?

Most people if they are familiar with Atlases at all think of the Rand McNally Road Atlas which shows maps of the major roads and routes one can take while driving through the United States. However, Atlases contain much more information than maps and cover many more subjects than the location of the nearest highway.

There are several types of Atlases, ranging from the general purpose map atlas to a wide range of specialty Atlases covering differing locations, historical periods and events. The one thing they all have in common is a copious use of charts, maps and other illustrations containing a variety of information designed to illustrate the relationship between a geographic location and a given topic. An Atlas graphically illustrates the interrelationship of a location’s geography and geology to its history and economic development. Some of the many topics covered by atlases include agriculture, business and industry, climate, geology, history, languages, population, religion, and the natural resources found in a geographic area.

Atlases can be used as visual aids to more easily explain a topic in a speech, paper or other presentation. Hewes library has numerous Atlases covering several different areas and they will be covered in this series of Research Tips.

But first, a little history of the Atlas. The first Atlas was printed in the 16th century by Gerardus Mercator, the inventor of a technique now known as the Mercator projection which is used to design the maps used by navigators to plot a straight line course to and from any location. On his first published book of maps, he placed a picture of the Greek Titan Atlas, holding the world on his shoulders, as the frontispiece of the book. This led to the title “Atlas” being used to describe any collection of maps, charts and other information that visually explain a given geographic area.

The Hewes library atlases are found on a tall desk to the right of the door to the Information systems office in the library. They can all be used in the library, but are not available for checkout. The next tip will discuss traditional Atlases found in the library.
Posted by Hewes Library at 10:56 AM No comments:
Email ThisBlogThis!Share to TwitterShare to FacebookShare to Pinterest
Labels: atlases, reference, research_tip

Hewes Library announces the implementation of ILLiad—a new interlibrary loan service. You can now request, and in most cases receive, articles electronically.

Learn more about ILLiad by attending one of the sessions listed below in the Barnes Electronic Classroom (HL03) or the Hewes Instructional Area (HL124):

Posted by Hewes Library at 10:55 AM No comments:
Email ThisBlogThis!Share to TwitterShare to FacebookShare to Pinterest
Labels: new_items

Hewes Library will be operating on our normal break schedule for Spring Break. The hours are available on the library's website and are listed below.