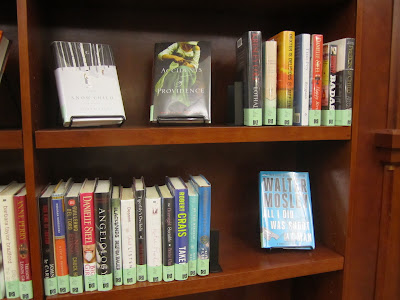 The latest ScotsRead titles to arrive are:

Posted by Hewes Library at 10:52 AM No comments:
Email ThisBlogThis!Share to TwitterShare to FacebookShare to Pinterest
Labels: new_items, on_display, ScotsRead

The related entries found on the left side of any definition refer the user to other definitions of the term or to related terms found in this or other Credo reference books. Words used in a definition that have their own separate definitions are indicated by hyperlink highlighting for easy reference.

The work has two different types of listing tabs found next to the “about this work” tab, a headings and a people link. The headings link goes to an alphabetical listing of the various topics defined in the dictionary. However the listings found before the letter “A” are to the various illustrations accompanying the work. If you are looking for a quick chart to explain a topic or to use in a presentation, this list will take you directly to the charts and illustrations. The people tab is a listing of all of the scientists who have an entry in the dictionary. Some of the subject and people definitions are very short, others such as evolution, get a longer explanation.


Access to online databases is limited to the students, faculty, and staff of Monmouth College.
Posted by Hewes Library at 10:45 AM No comments:
Email ThisBlogThis!Share to TwitterShare to FacebookShare to Pinterest
Labels: dictionaries, highlight, reference 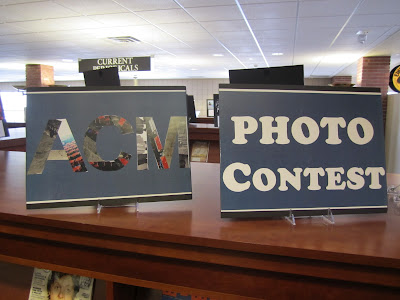 Next Friday, March 30, will be the final day for the ACM Photo Contest display.  Be sure to stop by and see images from around the world taken by ACM students on their travels.  The photographs and accompanying travel stories are located in the Current Periodicals section on the Main Level. 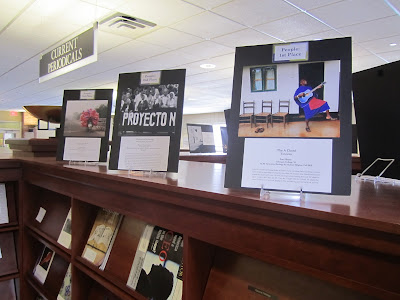 Posted by Hewes Library at 10:02 AM No comments:
Email ThisBlogThis!Share to TwitterShare to FacebookShare to Pinterest
Labels: events, on_display

What are you reading? MC's Psychology Department

The following list of titles, compiled by members of the Psychology Department on campus, have been highly recommended to others. To find each title's availability, be sure to check the Hewes Library Catalog.


Many thanks to the Psychology Department for sharing their favorites!

Posted by Hewes Library at 1:52 PM No comments:
Email ThisBlogThis!Share to TwitterShare to FacebookShare to Pinterest
Labels: highlight, what_are_you_reading?

Title Highlight: Dictionary of Subjects and Symbols in Art

Dictionary of Subjects and Symbols in Art

When looking at a still life painting one often looks at the bowl of fruit or flowers, nods and passes on. After all, it’s just a bowl of fruit isn’t it? Well, a look at the entry on “still life” in this book will quickly convince you that there is more than meets the eye in these artworks. In fact, these works are often commentaries on the world and spiritual matters, not just pictures of beautiful fruit and flowers. For instance, if the picture contains a skull, this serves as a reminder that all things, even the beautiful, must die, while an hour glass, candle or clock refers to the passage of time, an overturned cup, bowl or pitcher represents emptiness and a full bowl of fruit may symbolize gluttony and so on.

This book explores the meanings of these allusions and other symbols found in Christian and classical art. There are a few drawings accompanying the text illustrating different terms. The entries in the book explain the meaning of objects depicted (such as the skulls found in Dutch and Flemish still life paintings), describe various ways different mythological and historical characters are consistently depicted (Homer as a blind man, Jupiter/Zeus as a bull, St. George with the Dragon, etc.), and the ways different concepts (ie.,Hope, Charity, Love, Gluttony) are illustrated by different symbols. The supplementary index refers readers to religious beliefs, ideas and social customs mentioned in the entries.

The references found in this book add a layer of meaning to artwork and will assist in understanding the allegorical meanings that underlie much Christian and Classical art. So the next time you see a pile of Roman ruins in the background of a medieval painting you will know that they symbolize the demise of paganism and when you see a painting of a man being shot by arrows, you will know it is the martyr Saint Sebastian and a painting or statue of a woman with an owl perched on or near her depicts the Roman goddess Minerva (Greek Athena).

Posted by Hewes Library at 8:56 AM No comments:
Email ThisBlogThis!Share to TwitterShare to FacebookShare to Pinterest
Labels: dictionaries, highlight, reference

Hewes Library has returned to its regularly scheduled hours.  We hope that everyone had a great Spring Break!
Posted by Hewes Library at 7:52 AM No comments:
Email ThisBlogThis!Share to TwitterShare to FacebookShare to Pinterest
Labels: hours

An encyclopedic dictionary of conflict and conflict resolution, 1945-1996

Think these two dictionaries are about the same topic? Guess again; these two dictionaries with similar titles actually have very little in common. The first is a dictionary of conflicts/wars between and within nations during the years 1945-96; the second is a legal dictionary covering the concepts involved in resolving legal disputes between private parties. The terms and focus of the two books do not overlap.

The first book, found in the Hewes reference section is a valuable resource for finding quick information on the many international and national conflicts and personalities involved in them in the late 20th century. However, the United States, the then-Soviet Union and the Cold War between the two are not given separate entries in the book, although the many incidents that occurred between the two nations during the Cold War (such as the Bay of Pigs invasion, the detention of American pilot Francis Gary Powers) are given individual entries. The longer entries contain references for further information on a person or topic. Caution should be used in reading the referenced works as in the introduction the author states that some of the books referred to contain propaganda that champions specific causes, people or outcomes.

The second dictionary is found in the online Credo Reference Library. It contains short definitions of many terms used by lawyers to refer to conflict resolution between parties. Included are definitions of such terms as haggling, arbitration and Bet Din, a rabbinical tribunal used by Orthodox Jews in America and Israel to resolve questions of Jewish ritual law. There is no introductory material to this dictionary, just an alphabetic list of the terms defined.


Access to online databases are limited to the students, faculty, and staff of Monmouth College.
Posted by Hewes Library at 8:53 AM No comments:
Email ThisBlogThis!Share to TwitterShare to FacebookShare to Pinterest
Labels: databases, dictionaries, highlight, reference

New items are added to the Hewes Library collection on a continual basis. Recent titles have included:

Posted by Hewes Library at 11:31 AM No comments:
Email ThisBlogThis!Share to TwitterShare to FacebookShare to Pinterest
Labels: new_items

Hewes Library will have special hours over Spring Break.  We will be closed over the weekend and have reduced hours during the week students are gone.  Our full hours schedule can be viewed on the library's website.

Posted by Hewes Library at 7:32 AM No comments:
Email ThisBlogThis!Share to TwitterShare to FacebookShare to Pinterest
Labels: hours

Check out a ScotsRead book for Spring Break! New Titles! 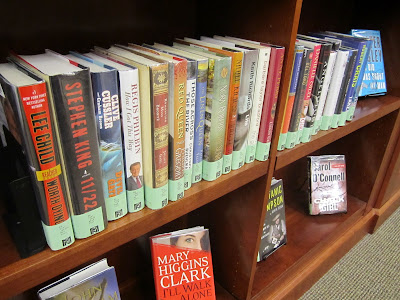 Don't forget to check out a ScotsRead title for light reading over Spring Break!  Several new titles have arrived recently and have been added to the collection.  Just added to the shelf are:

Posted by Hewes Library at 9:28 AM No comments:
Email ThisBlogThis!Share to TwitterShare to FacebookShare to Pinterest
Labels: new_items, ScotsRead

Title Highlight: A Dictionary for the Modern Flutist

A Dictionary for the Modern Flutist

Many people think that the only flute in existence is the one being used in every college and high school marching band or orchestra. But in fact, the marching band/orchestra flute is actually a Boehm flute, one that was designed in 1847 by the German Theobald Boehm and is only one of many varieties of flutes. The flute family is actually wide-ranging and includes such instruments as the ocarina (an end-blown flute) the fife (a side-blown flute often seen in portrayals of the American Revolution) and the recorder (a duct flute). This book defines, describes and illustrates not only the types of flutes, but almost anything one can think of related to the flute such as; the history of the flute, techniques of playing, parts of the flute, repairing and tuning the instrument, flute makers and flute making and many more topics. There is even an entry for the Hindu god Krishna who is often pictured playing the flute.

References in an entry to terms defined in elsewhere in the book are illustrated with bold type for easy reference. The many appendices cover a wide range of topics covering both technical and performance based aspects of the flute. The bibliography at the end of the book has many references for further reading on topics both historical and technical.

Posted by Hewes Library at 8:30 AM No comments:
Email ThisBlogThis!Share to TwitterShare to FacebookShare to Pinterest
Labels: highlight, reference

From the US Census Bureau:


"Originally a religious holiday to honor St. Patrick, who introduced Christianity to Ireland in the fifth century, St. Patrick's Day has evolved into a celebration for all things Irish. The world's first St. Patrick's Day parade occurred on March 17, 1762, in New York City, featuring Irish soldiers serving in the English military. This parade became an annual event, with President Truman attending in 1948. Congress proclaimed March as Irish-American Heritage Month in 1995, and the President issues a proclamation commemorating the occasion each year." (1)

A few of the highlighted statistics available:

Number of U.S. residents who claimed Irish ancestry in 2010. This number was more than seven times the population of Ireland itself (4.58 million). Irish was the nation's second most frequently reported ancestry, trailing only German.  Sources: 2010 American Community Survey.

7
Number of places in the United States named Shamrock, the floral emblem of Ireland. Mount Gay-Shamrock, W.Va., and Shamrock, Texas, were the most populous, with 1,779 and 1,910 residents, respectively. Shamrock Lakes, Ind., had 231 residents and Shamrock, Okla., 101, and three Shamrock Townships in Minnesota, Nebraska and Missouri had populations of 1,272, 413 and 40, respectively.  Source: 2010 Demographic Profile.

Number of places in the United States that share the name of Ireland's capital, Dublin. The most populous of these places is Dublin, Calif., with a population of 46,036.  Source: 2010 Demographic Profile.