This entertaining book tells the story of some of the many hoaxes perpetrated throughout history. The author defines a hoax as a tale, object or other occurrence made with the intent to deceive. The book does not deal with frauds made for the purpose of obtaining money which the author considers as swindles, not hoaxes. Thus the book does not talk about Ponzi schemes or Bernie Madoff’s shady deals, but instead describes occurrences such as the Pulitzer Prize awarded in 1981 to Janet Cooke for a false story about a heroin addict, the curse of King Tut, the Loch Ness monster, the Bermuda triangle, and the “Elvis is alive” hoax along with many others.

The time period covered is very long, beginning with Plato’s description of the lost continent of Atlantis continuing until the late twentieth century. Each article gives a short description of the event and gives the sources and reasons why the author considers it a hoax. There is also a short article describing the psychology behind the belief in hoaxes, or why some people are willing to be fooled. If you are interested in learning more about any of the hoaxes each article has a short bibliography with recommendations for more reading.
Posted by Hewes Library at 2:00 PM No comments:
Email ThisBlogThis!Share to TwitterShare to FacebookShare to Pinterest
Labels: highlight, reference

Are you struggling with a research paper? Are you unsure where to find scholarly journal articles on your topic? Stop by the Reference Desk or email the Reference staff to step up an appointment.

The Hewes Library librarians can help you locate scholarly articles for your paper, statistics for your speeches, and more! Librarians are available at the following times or by appointment:

Posted by Hewes Library at 4:05 PM No comments:
Email ThisBlogThis!Share to TwitterShare to FacebookShare to Pinterest
Labels: reference, research_tip

Encyclopedia of Prisons & Correctional Facilities - 2 volumes
Reader’s Guide containing a list of articles by topic
A list of topics covered by sidebars
Appendix: Institutions of the Federal Prison System, Bibliography (at the end of articles and at the end of the second volume), Index

Hewes Library has two reference encyclopedias on prisons and correctional facilities. The first encyclopedia is a one volume work giving short descriptions of various topics associated with the American prison system including accreditation, architecture, diet and food service, escapees and women in prison. It includes short biographies of noted prison founders and reformers as well as short histories of a few of the more infamous prisons like Alcatraz and Sing Sing. All of the articles are signed and there are short bibliographies after each article for those who’d like more information.

The second title is a two volume set that covers primarily the American prison system, but also has articles on a few other countries. The range of topics covered is greater than in the first book and the articles are a bit longer. The articles are also signed with short bibliographies for more in-depth research on a topic. The articles in this encyclopedia are not as neutral in tone as the ones in the first encyclopedia, although both are factual.

Interestingly enough, the topics covered are not the same in both books. For instance the military prison at Fort Leavenworth Kansas is covered by a solo entry in the first encyclopedia but does not get its own entry in the second; while the federal prison at Leavenworth Kanas is covered by an entry in the second book, but not the first. So if the topic you are interested in is not in the first book, try the second one and vice versa. The good thing is that both of these titles are shelved next to each other in the reference section, so it is easy to look through both of them at the same time.
Posted by Hewes Library at 9:22 AM No comments:
Email ThisBlogThis!Share to TwitterShare to FacebookShare to Pinterest
Labels: highlight, reference

Posted by Hewes Library at 9:16 AM No comments:
Email ThisBlogThis!Share to TwitterShare to FacebookShare to Pinterest
Labels: new_items, ScotsRead, what_are_you_reading?

New items are added to the Hewes Library collection on a continual basis. Recent titles include:

Posted by Hewes Library at 11:29 AM No comments:
Email ThisBlogThis!Share to TwitterShare to FacebookShare to Pinterest
Labels: new_items

An entertaining book that gives brief introductions to such modern mysticisms as A Course in Miracles, UFO encounters and Neo-Paganism as well as older forms of mystic or paranormal phenomena including Alchemy, Voodoo, The Egyptian Book of the Dead and Mystery Cults. Arranged alphabetically, the entries cover topics drawing from a world-wide range of religious traditions including familiar religious traditions such as Catholicism, Protestantism, Hinduism, Buddhism and Islam as well as unusual ones including the I AM, Rosicrucian, Pagan and New Age movements. The number of topics covered ranges from those claiming scientific foundations (ESP, Teleportation and Hauntings) to those with mystical foundations such as faith healing, chakras and clairvoyance. A very useful aspect of the book is that each article has a number of sources listed immediately after it that will assist in finding out more on a given topic. The book confines itself to mystic and paranormal topics, so items like the Loch Ness Monster, vampires and werewolves are not covered by this book, although zombies do get an entry.
Posted by Hewes Library at 9:59 AM No comments:
Email ThisBlogThis!Share to TwitterShare to FacebookShare to Pinterest
Labels: highlight, reference

Epics are long tales of heroes and villains developed from the oral folklore of a people or nation, although there are exceptions. Some examples of familiar epics are Greece’s Iliad, Ancient Sumeria’s Tales of Gilgamesh and the Germanic nations’ Ring of the Niebelungen. This book contains summaries of over 300 epics from all continents. It covers epics from a time span beginning around 3,000 B.C until the 20th century.

The author explains in her preface that the selection and retelling of the traditional epics included in the encyclopedia is subjective and based on the author’s opinions as to the significance of the epic. She has also standardized spelling variations or indicated alternate spelling of the names of characters or works that cross languages and cultures, such as Siegfried and the Mahabharata.

Both the titles of works and famous characters are given an entry. For instance, both the Song of Roland and Roland have articles devoted to them. Each entry includes a short synopsis of the epic or character. The appendixes are very useful for finding the various epics of given regions or time eras, since the names of many of them are unfamiliar to the average reader.

The author’s introductory essay gives a good overview of the Epic and the important role it plays in a country’s culture. However the introduction also mentions that many heroic tales depict the mistreatment of women and children, something that is not considered acceptable in many present day cultures but which reflects the culture prevalent at the time many epics were composed.
Posted by Hewes Library at 8:24 AM No comments:
Email ThisBlogThis!Share to TwitterShare to FacebookShare to Pinterest
Labels: catalog, highlight, reference 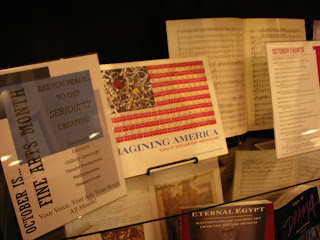 Monmouth College is celebrating October's Fine Arts Month with a variety of events across campus. To continue the celebration, Hewes Library has a collection of fine arts books on display in the cases located in the East Entry of the library. 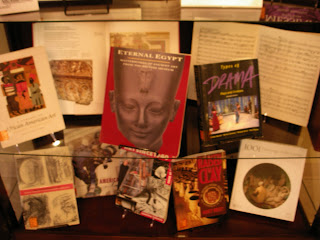 Titles pertaining to the upcoming theater productions, art exhibits, and fine arts here at the college are included. Please see a library staff member if you are interested in checking any of the titles out. Be sure to attend one of the Fine Arts events on campus this month!
Posted by Hewes Library at 8:15 PM No comments:
Email ThisBlogThis!Share to TwitterShare to FacebookShare to Pinterest
Labels: books, journals, magazines, on_display
Newer Posts Older Posts Home
Subscribe to: Posts (Atom)