David Tharp from The Nippon Foundation wrote the following about the program:

"In the first phase of the program, sets of 100 books will be donated to 300 key libraries, universities, and institutions across North America. Most of the
books have been published recently, but some older classics were also included to give a better appreciation of the historical background of the nation.

This first collection is just the first phase. Some of the best books about Japan are not currently available in English translation, and some are out of print. In the next phase of this ambitious educational project, a second wave of books will be translated into English, and publishers will be asked to reprint other books. A complete catalog listing the 100 books, with an accompanying summary of each book is now available, and is accessible at the bottom of this page. The books include such topics as Japanese foreign policy, the Japanese company, 21st century Japanese management, the psychology of Japanese society, anime, contemporary Japanese films, Japanese women writers, the making of modern Japan, the Tokyo war crimes trial, and post-war Japanese history." 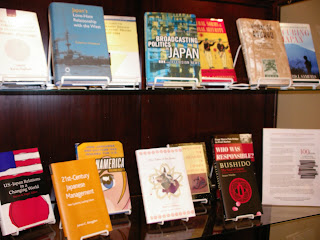 Currently, a selection of the donated books are on display in the East Lobby display cases. All books have been added to the Hewes Library Circulating Collection and are available for checkout.
Posted by Hewes Library at 10:27 AM
Email ThisBlogThis!Share to TwitterShare to FacebookShare to Pinterest
Labels: on_display